Somalia’s press freedom record is dismal. The 2019 World Press Freedom Index ranks Somalia 164th out of 180 countries while a 2020 Amnesty International report indicates that press freedom and civic space has been drastically shrinking over the past three years following the government’s endorsement of a strict draconian media law and applying new manipulation mechanisms on social media.

While the adoption of technology in Somalia has given voice to journalists, human rights defenders, activists, and revolutionalised the way they share content, mobilize and advocate for change, it has equally presented threats to online freedom of expression including harassment, arrest and intimidation, propaganda and hacking, among others. 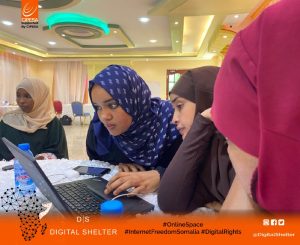 In continuation of its “Protection our Online Space” drive, Digital Shelter hosted a digital security training in Mogadishu to equip 30 media practitioners and human rights defenders (majority female) with the necessary skills and knowledge to overcome the growing threats.

The training was well received, with participants sharing past experiences of compromised digital security including hacking of personal and professional emails, as well as social media accounts.

“My Facebook account has been hacked three times after I started sharing news on my timeline” said Anisa, a journalist currently working with Somali Women Journalist (SWJ) Mogadishu-based group of female journalists fighting for press freedom and empowering women in media institutions.

Loss of sensitive information due to theft of laptops/smartphones was another common experience, with many participants confessing to not being in the habit of backing up data.

“I was robbed by bandits not too long ago at a gunpoint, they took my laptop, my phone and my wallet. The data and the sensitive information on my laptop was more valuable than the device itself and alas I never back it up. I lost ll the files including articles i wrote, photos, reports, basically everything. Now I am even worried for my safety” says Bishara a blogger and women human right defender.

Regarding online harassment, experiences ranged from trolling to the more extreme – death threats, in some cases leading victims to flee the country.

“I was trolled on Twitter after I shared a critical article about land grapping and squatting in Somalia” said one blogger.  “I received death threats on social media” said Hassan Ali, a journalist and blogger

“My colleague who wrote critical report on sexual abuse against female journalist has faced strong backlash including death threats and abuse on her Facebook messenger which eventually forced her to leave the country,” said another participant.

“Four years ago, my photo has been taken from my Facebook account and photoshopped in the most objectionable manner possible. I had to leave the city because of the embarrassment. You can imagine!” said another female journalist who requested to remain anonymous.

The training comes at a critical time, equipping beneficiaries with the necessary skills and knowledge to combat attacks and reflect on their safety and security. 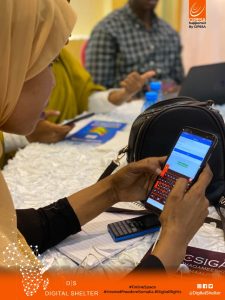 “I wish we had such training way before we started our journalism work. We depend on the internet to carry out our work and at the same time it brings us threats. We needed this training” said another.

With support from the Africa Digital Rights Fund (ADRF), Digital Shelter will continue to work closely with media professionals, bloggers, human rights defenders, and activists in Somalia by increasing their capacity in digital security in the face of shrinking online spaces.