In today’s digital world, Internet has become an essential platform for many activists to disseminate information, mobilize, build movements, fight for a cause and advance human rights at local and global level. it is a space where Women Human Right Defenders (WHRDs) supporting their communities increase their visibility and amplify their voices but one which comes with greater risk and brutal violence.

WHRDs Somalia face various risks for number of reasons including their gender status and the work they do- defending the rights of their communities. Threats against WHRDs vary from one another depending on their profile and the issue they work on. It is either physical (arrest, intimidation etc.) by the state and non-state actors or digital (online smear campaign, harassment and bullying as well as attacks on their personal and professional online accounts). The online threats sometimes have bigger consequences on the work of WHRDs and their institutions.

In light of this, Digital Shelter organized four days workshop on basic digital security protection in Mogadishu for group of WHRDs who are working with various indigenous and community organizations. The aim of this workshop was to equip them with skills and tools to protect themselves from the increasing gendered attacks. The total number of the trainees were 30 participants but due to COVID19 restrictions they were divided in to two groups (15 each) following advises from the Ministry of Health and W.H.O guideline on practicing social distancing during the training.

Among the participants who attended the training included representatives from prominent human rights organizations in Somalia such as:-

Other individuals including female lawyers, environmental activists and bloggers were also in attendance. The training covered various basic topics on digital security such as protecting devices (computers, laptops, smartphones) from malware and phishing attacks, managing and maintaining strong passwords, using secure communication apps, 2 factor authentication among others. It is worth mentioning that some of the sessions were specifically focusing on how to deal with online trolling, harassment and smear campaigns against WHRDs which was raised as a concern during the beginning of the training.

“We use the internet to promote our human rights work and amplify our voices but it is beyond our capacity to defend our digital space from the online attacks due to the limited skills on digital security. We are dealing with serious attack on our online identity and i believe trainings like this give us the tools and hands-on practice to build strong digital shield and resilience” said Nasteha from Elman Peace & Human Rights Center.

“We are already operating under conditions of extreme pressure not knowing if we will be back home safely in the afternoon, we receive threats through the online platforms we use, some of my colleague’s Facebook accounts have  been hacked. One of my co-worker had her phone tapped with surveillance app, something that initially started as love affair but later turned into more of tracking her human rights work.” Said one of the participants.

“As a woman and as WHRD in a conservative society, the very act of creating a profile on social media platforms and expressing my own opinion that does not agree with patriarchal norms put me in an extremely dangerous situation that I had to deactivate my Facebook account a year ago until now” Says Hodan who works on a project that supports survivors of sexual violence in Mogadishu. “Talking about sexual violence in the online space for instance and challenging the status quo can bring you a serious digital and physical attack. Your gender status is another vulnerability in this context” She added. 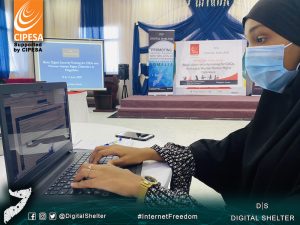 During the training, facilitators used creative and unique methodology which was more of activity based than just lecturing and presentations. Participants were allowed to have time for discussion and reflect the digital threats they face with real life scenarios. Additionally, the facilitators tried their best to cover participant’s expectations collected in the first session. This allowed them to make slight adjustment on the training contents to meet the overall objectives of the workshop while also accommodating other concerns raised by the participants.

At the end of the training, participants were informed that Digital security entails their whole existence in the  online world, their relationship with social media platforms, their presence in these spaces, and consequences of their digital footprints. That it is about behavioral changes when interacting with digital tools available at their disposal.

Digital Shelter understands that digital security is becoming an increasingly important aspect of security needs for women human right defenders and other activists working in Somalia who are already pressured by an extra layer of physical security concerns. We also understands that these organizations have limited resources and access to capacity building programs that can help them remain resilient in the face of constant digital and physical threats. For instance, one of our local partners, Somali Youth Vision an active youth-led organization had their twitter account suspended for over five months. DS raised this with AccessNow and the account has been restored and actively running again on twitter.

With continuous support, connection and availability of tools, these organizations are able to continue serving their community without hindrance. “SYV twitter account is back and active, thanks to DS and AccessNow for the help and support.” Said its co-founder Dr Shuaib.